You will earn 38 Krakloons for purchasing this product. 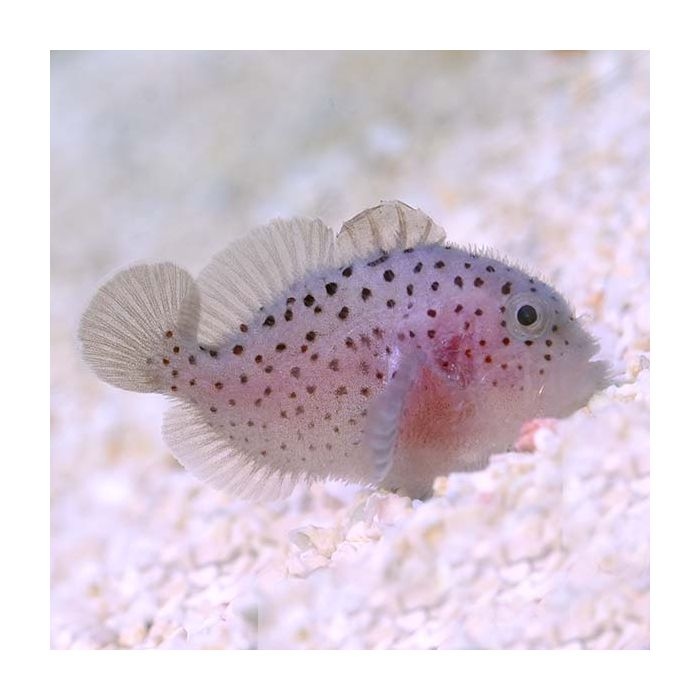 The Gumdrop Coral Croucher resembles a goby and is actually a member of the scorpionfish family. These fish are native to the reefs in the Coral Sea. They are often found in and about both hard and soft corals. This fish is gray/white in color with many red dots covering the body.

The entire body is covered with small hair-like appendages which gives this fish a fuzzy appearance. The spines on the dorsal fins of this fish are venomous. If you are stung, the reaction may be similar to a bee sting only a little stronger. It requires a 10 gallon or larger aquarium preferably with branching coral. It will rarely become aggressive towards other fish, but will fight with its own kind in smaller aquarium. Therefore, it is best if it is kept with other docile species.

It is common for Gumdrop Coral Croucher to spawn in an aquarium. Caution should be exercised if the aquarium contains Acropora sp. or similar SPS corals. They will lay their eggs on the underside of the coral's branch, which will cause tissue recession in that area of the coral. However, under good conditions, the coral will regenerate the lost tissue.

The diet of the Gumdrop Coral Croucher should consist of a variety of brine shrimp, frozen mysis shrimp, table shrimp, and frozen food preparations for carnivores. If housed in a reef aquarium with live branching corals, it needs to be fed once a day by target feeding the fish. If housed in an aquarium without substrate, it will require several feedings per day.