You will earn 18 Krakloons for purchasing this product. 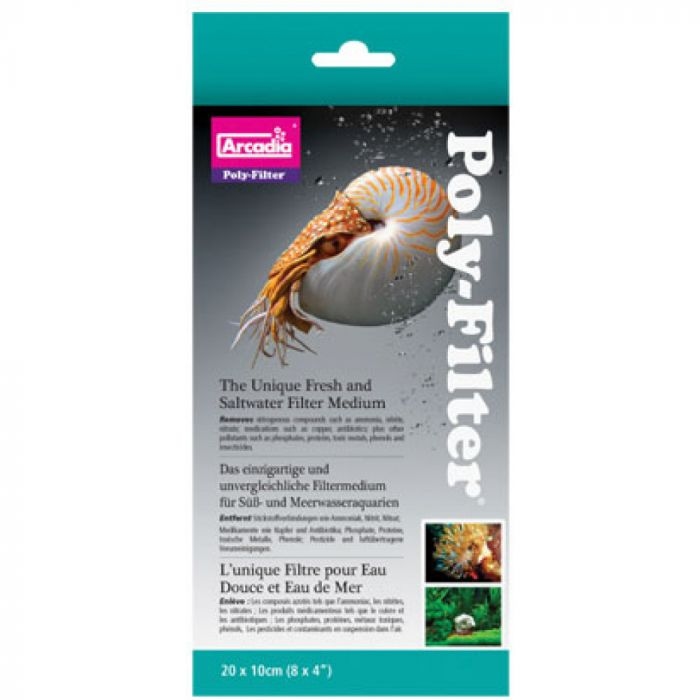 An established favourite from the U.S. the unique POLY-FILTER is now available once more through Arcadia.

Poly-Filter is a real asset in the fight to achieve the best water quality and sparkling clarity in your aquarium. There are many chemical products that can build up in the aquarium water over time, as well as some pollutants potentially present in tap water.

Poly-Filter will remove all of these chemicals including: Proteins and Amino Acids Nitrite, Nitrate and Ammonia Phosphates (the principal cause of algae in the aquarium) Toxic Metals As the pollutants are removed, the colour of the poly-filter changes, when it has turned black that is an indication that it is saturated and needs to be replaced. Unlike other substances sometimes used to aid filtration, once saturated, poly-filter will NOT allow hazardous substances to leach back into the aquarium.

Whilst removing all of the listed undesirable products, Poly Filter does NOT remove desirable trace elements and will not have a softening effect on the water, and so is equally usable in both marine and freshwater aquariums. Poly-filter can be used within any aquarium filter chamber as it can be cut to the size and shape required to fit.It can also be used in very small environments such as goldfish bowls, or Betta aquaria, by simply cutting a small piece and placing it anywhere in the water where it can be left to soak up any undesirable chemicals, until it has turned black and needs to be replaced. Suitable for fresh and salt water aquariums. Chemically filters and purifies water.