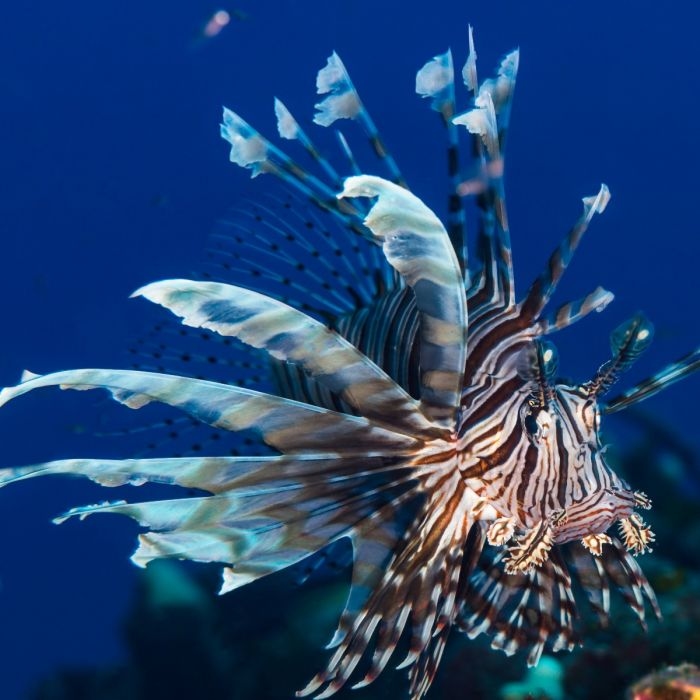 The Volitan Lionfish is also known as the, Common Lionfish, Red Lionfish, Turkeyfish and Butterfly Cod. It’s coloration can vary depending on the age and maturity of the fish, displaying a red to burgundy, white, and brown to black vertical stripes along the length of the body. It also has large, fan-like pectoral fins, and tall, banded spines on the dorsal fin.

The spines on the dorsal, pelvic, and anal fins are venomous, and used solely for defense. If stung, the affect is similar to a bee sting, only stronger. Lionfish venom contains proteins that are broken up by heat, which prevent them from entering the bloodstream. After a sting, remove any broken spines lodged in the wound, and immediately immerse the affected area in the hottest water you can stand (not scalding), for 30 minutes, followed by medical attention. For individuals sensitive to stings, its advisable to seek medical attention immediately. The Volitan Lionfish can grow rapidly to an adult size of 15 inches, and when full grown these fishes should be housed in a 120 gallon or larger aquarium with numerous hiding places. It will hide while acclimating to its new home, but then is generally found out in the open. It may eat smaller fish, shrimp, and other crustaceans in the tank.

When first introduced into the aquarium, live saltwater feeder shrimp should be used to entice this fish to eat. Its diet should include meaty foods such as live shrimp, live fish, and occasionally crustacean flesh. Once fully settled into the aquarium, with some diligence and patience, Volitan Lionfish can convert over to consuming a prepared diet consisting of chunks of fresh, uncooked table shrimp, frozen silversides, and pieces of frozen squid.