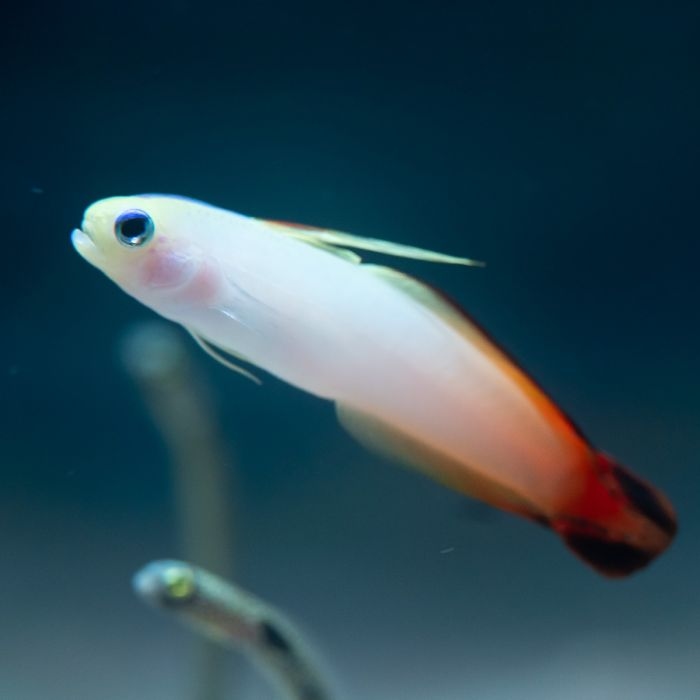 The Firefish is one of the more popular fish in the marine hobby. It is a magnificent fish with brilliant coloration, a unique body shape, and unparalleled personality. Also known as the Firefish Goby, Fire Goby, and Magnificent or Fire Dartfish, Nemateleotris magnifica has a yellow head, white anterior, and pinkish to orange-red posterior. The dorsal, anal, and caudal fins are highlighted in black. In addition to its striking coloration, the Firefish Goby is also heralded as a sweet-tempered fish with lots of personality. And, because of its small size, the Firefish Goby makes a great addition to the smaller reef system. In the wild, the Firefish Goby is usually found in groups hovering over the reef, harvesting planktonic food that drifts by in the current.

The docile, Firefish Goby is timid and in the wild, each will have a "bolt-hole" into which it quickly ducks when threatened. In the home aquarium, the Firefish Goby needs multiple safety zones amongst rocky crags or outcroppings into which it can dart if stressed. This member of the Gobiidae family is generally not aggressive towards other fish except those of its own species. However, a mated pair can live peacefully together. To best recreate their wild habitat, the Firefish Goby requires a 10-gallon or larger system with moderate lighting conditions and a moderate current passing over the live rock "reef." Keep in mind that a stressed Firefish Goby will try to jump out of your aquarium. As such, house the Firefish Goby in aquarium systems with a lid. Hobbyists who use a halide system with an open top should construct a Plexiglas "edge" around the trim, at least 10" tall. Along with algae and zooplankton growing in the aquarium, the diet of the Firefish Goby should consist of finely chopped small crustaceans, vitamin-enriched brine fish (live or frozen), mysis shrimp, and prepared foods