You will earn 55 Krakloons for purchasing this product. 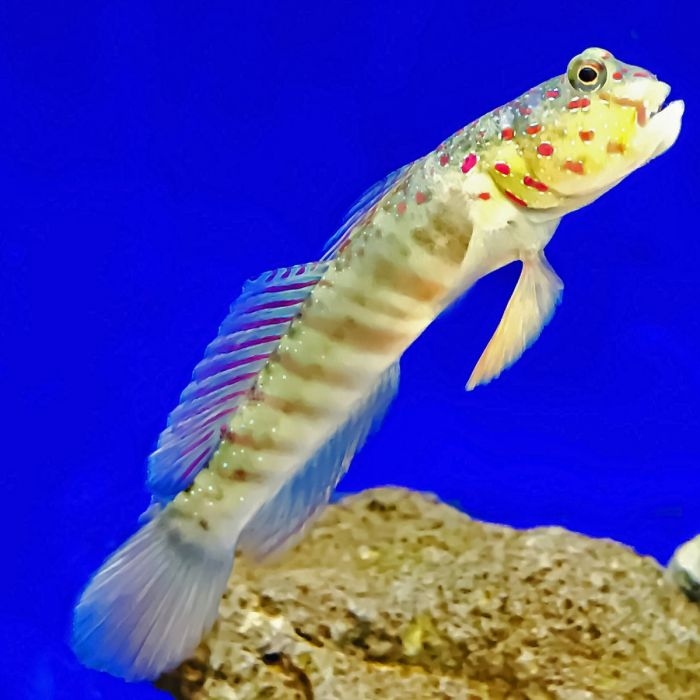 The Spotted Watchman Goby is also known as the Pink and Blue Spotted, Singapore Shrimp, Leptocephalus Prawn, or Pinkspotted Shrimp Goby. The head and body are yellow to tan with pink spots surrounded by smaller blue spots. It requires a 30 gallon or larger aquarium with plenty of loose coral rubble, ample swimming room, and a sand bottom for burrowing. It rarely becomes aggressive towards other fish, but it is territorial, and will fight with its own kind unless they are a mated pair. It may try to jump out of the aquarium or other small openings, therefore, a tight-fitting lid is required. The Spotted Watchman Goby diet should include a variety of mysis shrimp, vitamin-enriched brine shrimp, table shrimp, and frozen food preparations for carnivores. It should be fed at least twice per day.

The Tiger Snapping Shrimp may also be called Symbiosis Shrimp and Snapping Shrimp. The body is tan with rust colored broken stripes running across the back. These beneficial shrimp will constantly move gravel making them excellent sand stirrers in the reef aquarium, as well as scavenging any uneaten food. The sound it makes comes from an appendage on the pincher which moves when the pincher is opened or closed and water is ejected. The Snapping Shrimp can be easily confused with Mantis Shrimp if judged by sound only. Unlike the Mantis Shrimp, it is not harmful and will not pose any threat in the tank, with the possible exception of very small shrimp. The name Symbiotic Shrimp comes from the equally beneficial relationship the Pistol Shrimp has with gobies (e.g. Amblyeleotris or Stonogobiops). The goby, with better eyesight, warns the shrimp of predators. The shrimp share its food with the goby. Tiger Snapping Shrimp thrive in environments with sand, rock caves, and dim light. If in pairs, one will often stand guard at the burrow while the other is inside.

The Pistol Shrimp are intolerant of copper or high nitrate levels, but need a correct level of iodine in the water to promote proper molting. Snapping Shrimp will accept any meaty freeze-dried and frozen foods and bottom feeder tablets.