You will earn 45 Krakloons for purchasing this product. 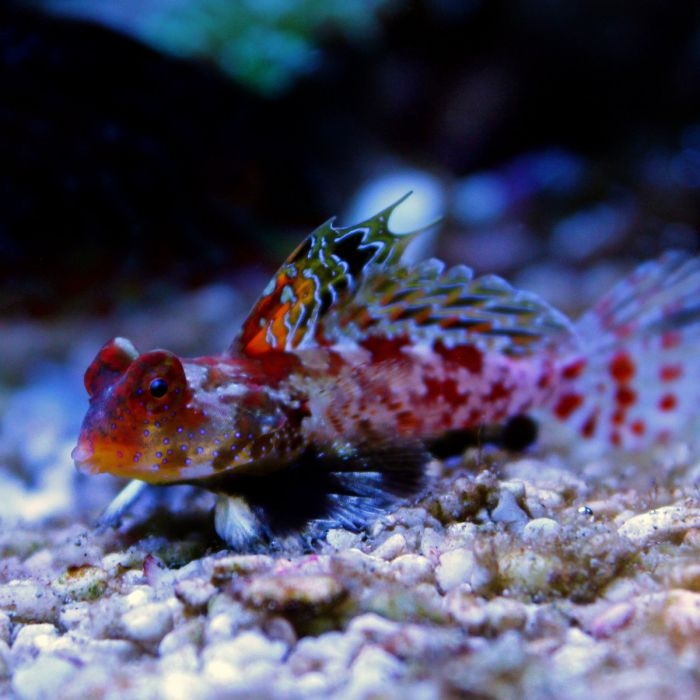 The Ruby Red Dragonet is an eye-catching bottom dweller currently known only from Jolo Island, part of the Sulu Peninsula in the Philippines. This diminutive, bright scarlet and yellow fish is found amongst areas of broken coral rubble that is interspersed with outcrops of soft and stony corals, to depths of 38m (125ft).

Like its close relative, the Scooter Blenny, this species has an interesting method of locomotion, using oversized ventral fins to ‘scoot’ along the substrate and habitually perch as it feeds on microfauna. Although this fish has been seen in the trade for several years, it has only recently been formally described. When keeping the Ruby Red Dragonet in the home aquarium, it is vitally important that the tank is fully mature, with plenty of live rock and a living sand bed which will provide the fish with natural foodstuffs. For this reason, although Ruby Red Dragonets do not grow especially large, an aquarium with a decent footprint (length and width) is important to provide enough food on a continual basis. Without such nourishment, these fish tend to waste away. In larger aquaria, multiple specimens can be kept together in the same Tank, ideally one male, with several females - all of which should be introduced simultaneously. The male will use his elaborate dorsal fin to display to the females during courtship rituals.

If more than one male is present, the rivals will both use their dorsal fins as a show of dominance. To keep more than one male in the same Tank, the aquarium must be of generous proportions, with plenty of visual barriers, and the specimens added simultaneously when juvenile. Tankmates should be small and peaceful, so that the Ruby Red Dragonet is not bullied or harassed at feeding times. Do not keep with anemones, as these docile bottom dwellers are likely to be consumed. The Red Ruby Dragonet (S. sycorax) is very similar in appearance to S. tudorjonesi from Cenderawasih Bay, Indonesia, although the latter tends to lack the intense yellow colour of the ventral and pectoral fins, the white markings on the head, and has much reduced white markings over the body. In addition, the first dorsal-fin spine is the longest in S. sycorax, whereas the third spine is longest in S. tudorjonesi. Interestingly, the Ruby Red Dragonet, S. sycorax is named for the red-robed and cloaked Sycorax warriors from the BBC sci-fi series, Dr Who in allusion to the colouration and the ostentatiousness of their garb.

Can be challenging to feed. Absolutely MUST be kept in an established tank with plenty of live rock and a living sand bed, which will provide a natural supply of tiny invertebrate foods. In addition, offer small meaty items such as vitamin-enriched brineshrimp, finely chopped Mysis shrimp, finely chopped krill etc; however, be sure to make the foodstuffs a small enough size for the Ruby Red Dragonet to eat. Before purchasing, please be aware that this species must be provided with natural prey (non-live foods rarely sustain them for any great length of time), and a constant supply of tiny foods for this purpose could be cultured in a fishless refugium.

This species has been bred in very small numbers on a commercial basis. When ready to spawn, a well conditioned pair will swim up from the substrate during the evening (usually after lights out), rising into the water column whilst locking fins, and culminating in a simultaneous release of gametes. S. sycorax produces smaller spawns with a lower fertility rate than either S. ocellatus or S. stellatus, the offspring also smaller and slower to develop in comparison.