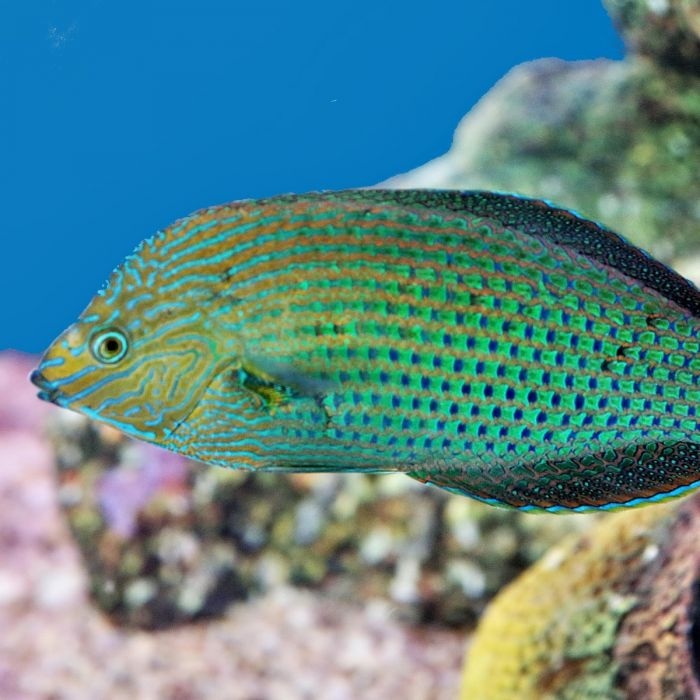 The Dusky Wrasse is a relative unknown beauty due to its sporadic appearance in the aquarium trade. The Dusky Wrasse typifies members in the Genus Halichoeres demonstrating gregarious activity once properly acclimated to its new environment. Similarly, coloration varies greatly based on the age and sex of the Dusky Wrasse.

Juveniles and females demonstrate muted coloration that contrasts sharply against the magnificence of a male-sporting mating coloration. The adult male Dusky Wrasse is a true "peacock" sporting a rainbow of colors that peer through a predominantly dusky blue coloration. Jewel-like red and orange coloration sets off the stunning green crescent-pattern at the base of the caudal fin.

A sunny yellow undertone brightens the anterior half of the male Dusky Wrasse to dramatic effect. The ideal setup for the Dusky Wrasse will be a well-established saltwater aquarium of at least 75 gallons in size aquascaped with live rock. Incorporate a large area of open substrate as well as open spaces for swimming.

A sandy bottom 2-3 inches in depth provides refuge for the Dusky Wrasse to burrow in the evening or when frightened. House the Dusky Wrasse with other peaceful wrasses, including its own species. The Dusky Wrasse will eat fireworms and pyramidellid snails, protecting corals and clams. In addition, the Dusky Wrasse also may eat feather dusters, very small wild shrimp, tubeworms, and flatworms. It may also eat parasites off of tank mates. The diet of the Dusky Wrasse should include vitamin enriched frozen mysis shrimp and vitamin-enriched frozen brine shrimp. These fish need small frequent feeding throughout the day.