You will earn 47 Krakloons for purchasing this product. 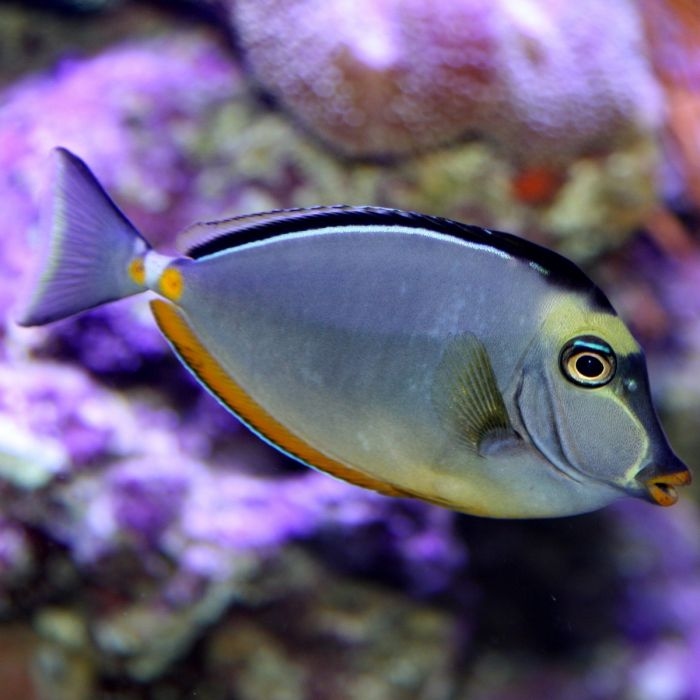 Both the Blonde Naso Tang, and its close cousin the Naso Tang N. literatus are called the Orangespine Unicornfish. This comes from the pair of spines surrounded by a bright orange area on either side of the caudal peduncle. These are some of the most attractive and distinctive of the unicornfish with strong patterning and color accents. The Blonde Naso Tang, originating from the Red Sea and Indian Ocean is more rare as it is not quite as widespread as its very similar counterpart the Naso Tang, which has a black dorsal fin rather than yellow and is found in the Western and Central Pacific Ocean.

The Blonde Naso tang, also known as the Elegant Tang, is a very personable pet fish. Once it is comfortable it can even be trained to accept foods from its keeper's hand. A little shy at first, it can be hard to acclimate to aquarium life. Provide it with lots of room to roam around in and some live rock with naturally growing algae and/ or blanched lettuce and brine shrimp to entice it to eat. Once eating it can be offered a variety of algae based aquarium fare for its basic diet, along with some meaty foods. Being a peaceful fish with an amicable nature, it will get along with most other marine fish. Though it can be kept with a variety of tank mates this species has been known to get aggressive with other surgeonfish, especially those of its own genus. Unless you have a huge (hundreds of gallons) system, it is best to house just one Naso tang to a tank.

Like all surgeonfish and tangs, the Blonde Naso Tang likes a lot of water turbulence rather than a placid aquarium. Being very active during the day they need a large tank with plenty of room to swim about but will also need rocks/ corals to provide some cover and to sleep in at night. As they are primarily herbivores they generally ignore invertebrates, but lush natural algae growth will be greatly appreciated and nicely suited for a reef environment. Once they get acclimated and become accustom to aquarium foods they are quite hardy and long lived.