You will earn 52 Krakloons for purchasing this product. 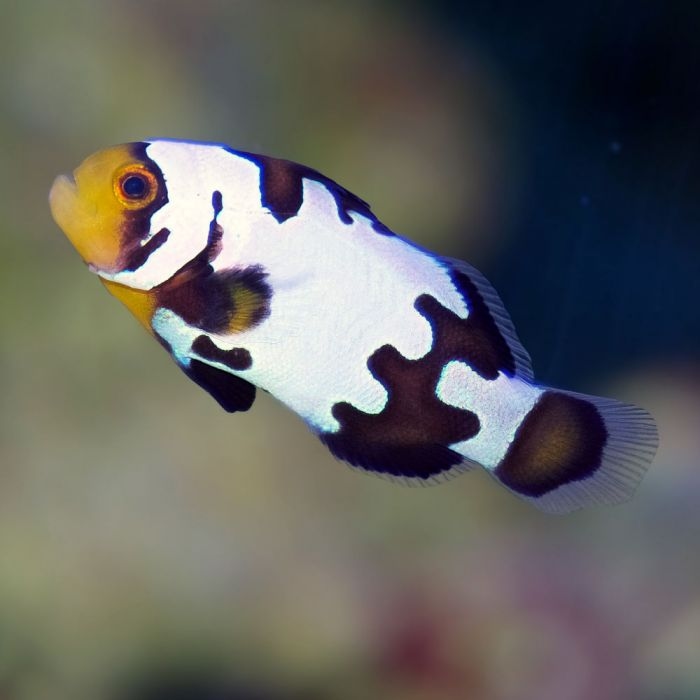 The Black and White Ocellaris Clownfish, also known as the Black Perc, Black Percula Clown Anemonefish, or Black and White False Percula Clown and is normally found in association with anemones on the reefs of the Coral Sea. It can be found individually, or more commonly, in pairs or small groups within the same anemone such as Heteractis magnifica or Stichodactyla mertensii.

The Black and White Ocellaris Clownfish is very distinctive with its jet-black body and three white stripes on each side. The Black and White Misbar has broken bars or bars that do not connect around the entire body. The Extreme Misbars have very few bars and could be only on one side of the fish's body. When young, these fishes will have an orange region above their mouth, but will turn all black with age.

Captive-bred clownfish are easy to breed in the home aquarium. The females will be the largest of the pair, and two fish will usually stay close to each other in the aquarium. These fish are egg layers and will deposit the eggs on a flat surface, and defend the eggs from other tank mates. The eggs will normally hatch in 6-11 days depending on the temperature. The fry must be reared in a separate aquarium on a diet of rotifers then baby brine shrimp.

Captive-bred clownfish are omnivores, requiring both meaty foods as well as some greens in their diet. A high quality marine flake food, rich in spirulina algae, as well as freeze-dried and frozen foods are readily accepted.